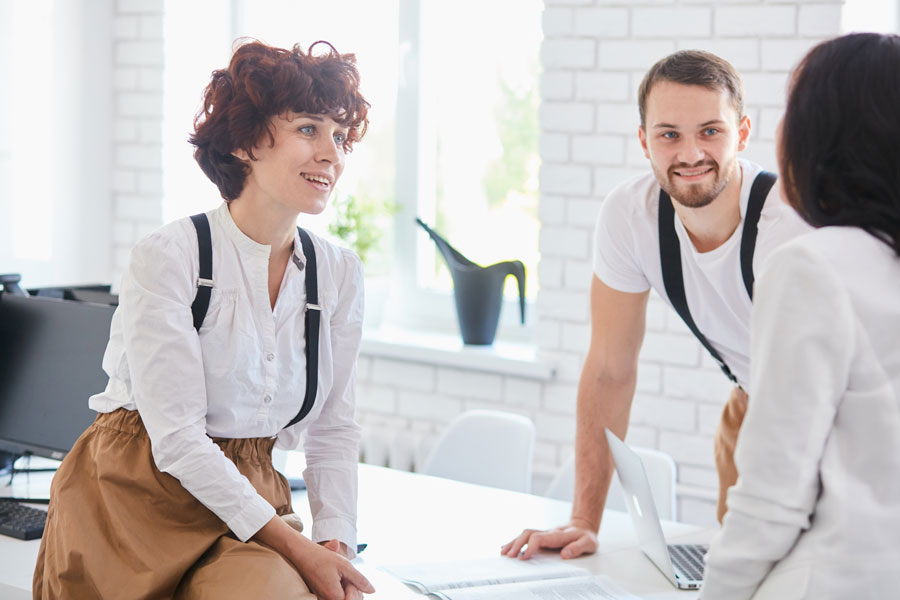 Relationships are the most consequential factors to your success in the workplace. Whether it involves working with jerks and other people you can’t stand, managing conflict, or simply working with others to get stuff done, I’m sure most of you would agree that managing relationships is no easy task. It takes patience, skill, and a whole lot of effort.  But failure to build successful relationships can be costly. It can lead to low productivity, create an environment of low morale and a disengaged staff who do the bare minimum in the workplace. In fact, according to multiple studies including one conducted by Gallup, over 60% of employees is disengaged, translating into over $450B in lost productivity!

So what steps can you take to build successful workplace relationships? Consider rapport. Tony Robbins once said, rapport is power. Rapport also leads to higher morale, better engagement, and increased productivity. Check out these tips for leveraging rapport to build better relationships in the workplace:

Practice Three Up, Three Down

This is an approach to providing fair and honest feedback. It helps leaders build rapport with their employees when it comes to not only building relationships, but managing performance, building trust, and keeping them engaged. Not just any type of feedback will do – it must be specific, constructive, and BALANCED. Some leaders believe that only pointing out the areas where an employee needs to improve upon will lead directly to improved performance. Other generations in the workplace such as the Baby Boomers may relate more to this type of “tough love” feedback as part of a hard day’s work. But in today’s multi-generational environment where relationships matter more than ever, and where employees are increasingly empowered to have a say in their career development, focusing only on what an employee can improve upon (or what some call “focusing on the negative”) can ruin rapport between a leader and his or her staff. When leaders focus exclusively on the negative, employees can end up feeling defeated — as if they are not capable of doing their job effectively because they’re constantly being told what areas they need to fix. An employee is also more likely to tune out their boss and be disengaged in the discussion if they feel like their boss is being too negative.

Instead of emphasizing the negative to the exclusion of the positive, leaders should take a more balanced approach. I recommend a technique called the “Three Up, Three Down” approach. It was first introduced to me by Laura Liswood in her book, The Loudest Duck.

The “Three Up, Three Down” approach is a method for balancing both positive and negative feedback when leaders hold performance discussions with their employees. This balanced approach is effective because it allows for a productive two-way conversation and alleviates some of the stress associated with having crucial conversations. When a boss acknowledges some of the good things an employee has done, they are able to build a stronger relationship and establish common ground. The employee is less likely to take the negative feedback personally and will be less defensive because the employee is more apt to accept the feedback as honest, fair, and constructive.

I’m a fan of technology just like the next person. But when we rely too much on technology such as our laptops and cell phones, we begin to practice phubbing: the practice of ignoring others in order to pay attention to one’s phone or other mobile device. And that’s rude! When it comes to using our laptops, there are people who literally sit next to someone at work and communicate via email or instant messaging instead of speaking face to face.

This lack of human interaction stunts our interpersonal development and our ability to establish rapport with the people we work with. We miss out on observing the tone, the context and the body language during face-to-face meetings — all of which can be vital to comprehension and the health of a relationship. When we rely mainly on email and other forms of technology to communicate in the workplace instead of conversing face-to-face, things can get lost in translation, which can weaken rapport.

The best way to combat this problem is to achieve the right balance when using technology. Give someone your full attention by putting away your laptop or cell phone during a face-to-face conversation. Better yet, if you have an important phone call to make or email to read when someone wants to talk to you, inform that person that it may not be a good time to talk, but be sure to schedule time later for that conversation with your undivided attention.

Practicing these two tips goes a long way to build rapport and strengthen workplace relationships. This will lead to more engagement, better morale, and increased productivity.

How do you build stronger workplace relationships?

Eric Williamson is a keynote speaker, consultant and author of the book How to Work with Jerks. Order your copy today on Amazon or contact him for a signed copy. He works at the intersection between conflict resolution, emotional intelligence, and leadership development. He specializes in the arena of removing workplace friction so that IT leaders can thrive through uncertainty and achieve their long and short-term goals. For more information about thriving through uncertainty, engaging your teams during turbulent times, or a strategic working session to achieve your long- and short-term goals, visit www.TailoredTrainingSolutions.com.

From the CEO Blog…
Go to Top